As you all know it was with great sadness that we learned about the passing of a great man, Richard Griffiths on the 28th March. He was a well-known and gifted actor. He performed in an array of Television and Film Productions. The most famous of his work was that of his performances in ‘Withnail and I’, ‘Pie in the Sky’, ‘History Boys’ and, as uncle Vernon Dursley in the ‘Harry Potter’ series. Richard was one of Britain’s most celebrated actors and what many people didn’t know was that he had Deaf parents and was able to communicate using British Sign Language.

In 2012, Zebra and Deaffest were pleased to announce the news of Richard becoming Deaffest’s first patron and as a result of this, the team had the privilege of meeting and interviewing Richard in the summer of 2012. 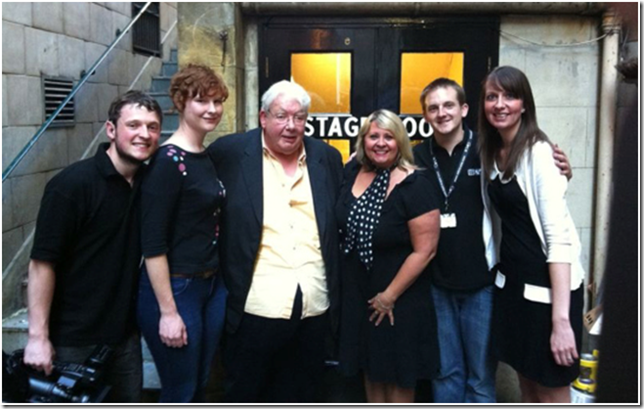 During his interview, he spoke of what it was like growing up with Deaf parents and his love for acting. He shared about his acting experience and how he wanted to encourage Deaf film makers, of all ages, to pursue this dreams. He expressed how he appreciated the skills that Deaf people have and the way in which they create films with such visual and captivating imagery.

Zebra and Deaffest are truly saddened by the loss of such a talented man. Staff, from both Zebra and the Deaffest team, had the honour of attending Richard’s funeral where they paid their respects and remembered the life and times of Richard Griffiths. The service was held at Holy Trinity church, Stratford-Upon-Avon and was packed to the rafters with friends, family and loved ones, who had come to say farewell. By all accounts it was a beautiful and emotional ceremony, accessible to all through the use of a sign language interpreter.