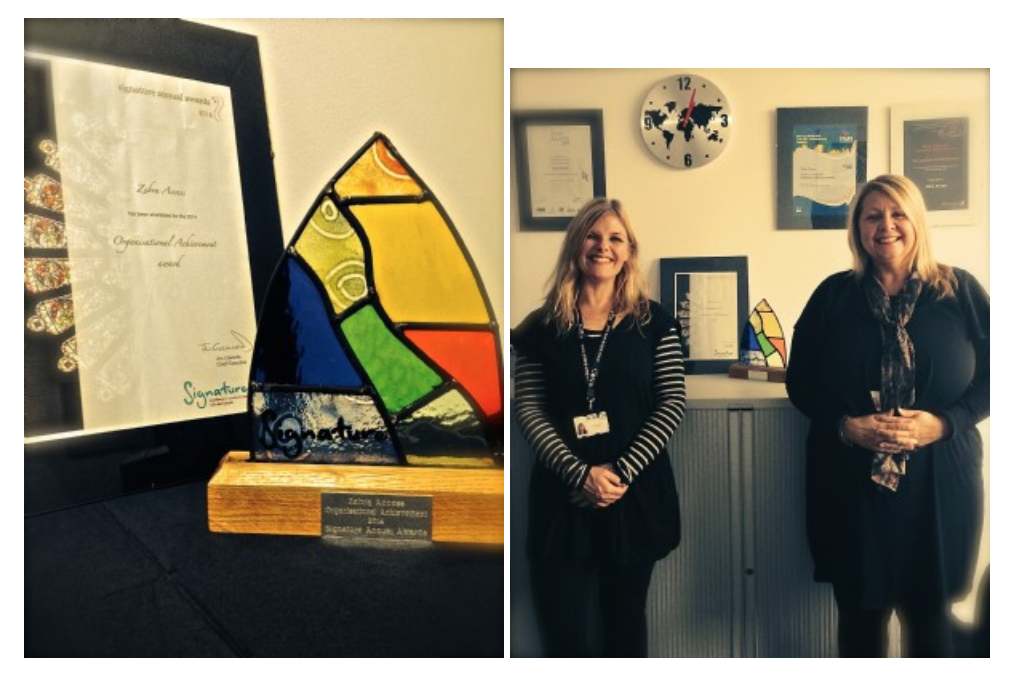 Zebra Access, scooped the award in recognition for its work to ensure that deaf people enjoy equal participation and access to further education and employment without any communication barriers.

Both Directors Nikki Stratton and Marilyn Willrich are delighted that this unique Charity has so deservedly won this award. Almost into its 10th Anniversary in 2015 one of the major projects coordinated by Zebra Access is ‘Deaffest’, an international Deaf Films and Arts Festival that showcases various talented Deaf Artists from all over the world.

Now in their sixth year, the awards, hosted by UK charity and leading awarding body in deaf communications, Signature, honour individuals, organisations and community groups that are striving to break down the barriers of communication between deaf and hearing people.

At a prestigious ceremony held at Durham Cathedral, a mixture of both deaf and hearing people saw their hard work and contributions rewarded.

Zebra Access was founded in 2005 by Nikki Stratton and Marilyn Willrich, who through their hard work have improved the rights of many deaf people in their area. The charity works to deliver training courses, support various events, clubs and initiatives, and open doors to employment opportunities.

Nikki and Marilyn said: “It was an honour even to be nominated, so to actually win the Organisational Achievement award is fantastic. Everyone at Zebra Access really enjoys working with the deaf community and it’s great to see the different we are ale to make to people’s lives, by building their confidence and improving their employment opportunities.”

Jim Edwards, Signature chief executive, said: “Selecting winners across the seven categories was a very tough decision, as every nominee this year has been outstanding in their own field.

It is extremely important that organisations such as Zebra Access are publicly recognised for the vital work they do, which includes helping deaf adults find employment and bringing a hugely popular event like Deaffest to the deaf community.

“We were delighted to present the Organisational Achievement award to Nikki, Marilyn and the team in acknowledgement of their passion, hard work and commitment.”